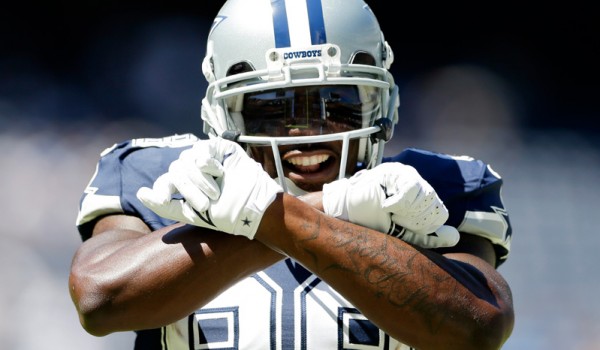 Dez Bryant has certainly had his share of drama since being chosen by the Dallas Cowboys 24th overall in the 2010 NFL draft. But, the most recent allegations may ruin Bryant’s reputation beyond repair. According to various reports, an alleged video depicting Bryant doing something “horrific” could put his career in jeopardy.

There were plenty of concerns about Bryant’s character before heading into the draft, most concerning his suspension by the NCAA for lying to officials about his relationship with Deion Sanders. Bryant’s athleticism, great hands, good body control and dominance in the red zone were too much to pass on. Despite concerns about Bryant being a prima donna, he was easily the best WR in the draft. The Cowboys knew that, they were willing to take the risk.

Bryant had a troubled childhood. He was born to a fourteen year old mother and a father in his 40’s. His mother was arrested for selling crack cocaine when he was eight. He hopped around from home to home, lacking any semblance of stability. Years later, in 2012, Bryant was arrested for allegedly striking his mother, Angela Bryant. Charges were dropped when Bryant agreed to attend counseling. He spoke of his relationship with his mother in an interview with Tim McMahon from ESPN Dallas in 2012: “Let me tell you something, my relationship with my mom is great….Even after the fact, it’s great. I don’t want to get into it much, but when it happened in our eyes, it was overblown….I love my mom. My mom loves me. Everything is great between us.”

Jerry Jones hired a team of “advisers” to support Bryant and set ground rules that need to be followed. Rules include; a midnight curfew, abstaining from alcohol, security and counseling. The ultimate goal being to keep Bryant out of trouble and onto the field.

A 2013 piece by Jason Whitlock on ESPN.com highlighted the many concerns regarding Bryant’s “emotional scars.” His junior high and high school teachers told reporters that he was prone to irrational outbursts. Tantrums that carried on well into his NFL career. Bryant is well-known for his sideline hysterics, most of those hysterics directed toward his teammates. Sometimes the words of a motivating nature, other times more heated and volatile.

Dez got off to a slow start in 2014, than soon caught fire, almost ensuring a large contract offer by the Cowboys at the season’s end. If the deal is not done by March 2nd, if not Bryant will be slapped with a franchise tag. It gives Dallas more time to make Bryant a Cowboy for life, hard deadline July 15th.

Enter the video: Cowboy officials claim to have no knowledge of  the video. According to TerezOwens.com, this supposed video is to be released today or tomorrow. Some reports are comparing it to the infamous Ray Rice video, but claims say it is worse. Bryant took to twitter on Friday with a vague tweet mentioning that he might need to do an exclusive interview about his life for the past five years. Seems ominous, but a rather good idea. If he waits until after the video is released and it is as bad as rumors say, this could be the end of the line for Bryant. Coming forward speaking to the press, addressing the fans and the Cowboys organization and being forthright may be the first step in regaining trust.

Right now, this video is speculation. But, if there is one thing that we know, if the video does exist, it won’t stay under wraps for long. If Bryant has cut all of the bad influences out of his life, on the verge of his new contract they may be looking for “revenge”.

With the never ending barrage of incidents in the NFL the last couple of years, I’m not sure much can surprise me.