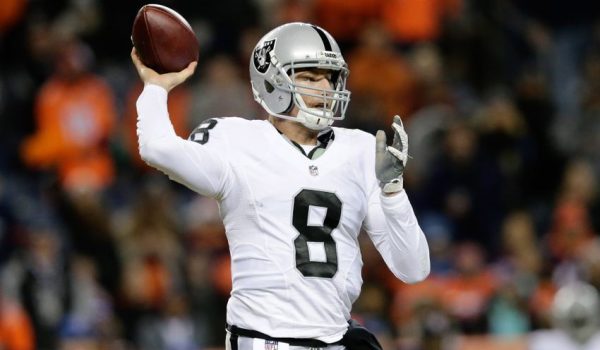 The first week of 2017 welcomes some fantastic matchups for Wild Card Weekend:

Home teams have the advantage in each matchup this Wild Card Weekend. Will there be an upset? Will Oakland live to see another week? Will the Lions win their second postseason game in franchise history? Last year, every road team won in the first round of the playoffs. Let’s take a look.

The Texans are a 4 pt favorite over the Raiders according to Bovada, a line that would read very differently if  QB Derek Carr hadn’t gone down with a broken fibula on Christmas Eve. Rookie QB Connor Cook will get the start for the Raiders after backup Matt McGloin injured his shoulder in the Broncos beatdown in Week 17th. This is a monumental moment for the Michigan State alum, Cook becomes the first QB in the SuperBowl era to make his first career start in the playoffs. Anyone who is not a Houston fan or a Raider hater has to be rooting for this kid to do well. The Raiders also signed Leigh Steinberg client, QB Garret Gilbert to the practice squad. Gilbert has never thrown a pass in a regular-season NFL game. Gilbert may get an opportunity if all does not fair well with Cook. On the opposing side is Brock Osweiler, the $72 million dollar man who has greatly underachieved this season. Even with his dismal season, the Texans are favorites in this game. In the last matchup between these two teams, the Texans lead in time of possession and only lost by a touchdown.  Lamar Miller should be an X-factor in this game. Still, either way, the Texans should win handily.

Houston: Will Cover the Spread, Total Will Go Under (37)

The Seahawks are favored by 8 pts. over the Lions, seems like a relatively modest line, fitting, considering the usually dominant Seahawks had a rough start to the 2016 season. Either way, the Seahawks are the definition of home field advantage. The Lions are coming off a competitive loss to the Packers at home and are now going into hostile territory in a must win. The Lions have lost four of the last five against the Seahawks and have just one postseason win in franchise history, not great stats for a Lions team that started off strong and lost their last three. Stafford is the key for the Lions, limit turnovers and perfect the passing game. The Lions have no running game due to their injuries and considering Seattle’s defense against the run, the Lions won’t gain much traction. If the Lions defense can step up and keep the game close, they have a chance.

Seattle: Will Cover the Spread, Total Will Go Over

Miami has been quite impressive going 10-6 and placing 2nd in the AFC East. Kiko Alonso and Kenny Stills have been X-factors in the Dolphins recent success. Starting QB Ryan Tannehill has done more than held his own, shaking off critics before an ACL injury took him out of the December 11th game against the Cardinals. Before he went down, Tannehill threw for 19 TD’s and had a QB rating of 93.5 on the season. Ruled out for this game against the Steelers, backup QB Matt Moore takes the reigns against the Steelers. Can the Dolphins pull through with the upset? The Steelers rested starters in week 17, so they will be raring to go at home against the Dolphins. The Steelers will be looking to do some damage after they lost to the Dolphins earlier in the season. The Steelers come into this game winning seven games in a row. When the Steelers offense gets going, they are virtually unstoppable. The Dolphins defense is ranked 29th, not a promising stat for an away game in Heinz Field against a veteran QB led team. Barring any injuries, this game screams Steelers. The spread is high, sitting at 10, not surprising after what the Patriots did to the Dolphins in Week 17.

Steelers Will Cover the Spread, Total Will Go Over

After a rough first half with soap opera filled drama, the Packers finished strong with QB Aaron Rodgers looking like the QB that Packers fans know and love. Rodgers’ accuracy, ability to scramble, arm strength and ability to read a defense is incredible. Observing comments from his scouting report in 2005, it is no wonder some of these “pro” scouts still have jobs.

AFC Scout: “I don’t like him. He’s a clone of Harrington and Boller. They all throw the same way. What have those guys done? Nothing. If you take him in the second round, fine. Heady guy. They do a marvelous job of coaching quarterbacks there. I don’t think he’s as good as the top quarterbacks coming out last year.”

NFC scout: “The guys that Tedford has had, what have they developed into? They’re too well-schooled. So mechanical. So robotic. I don’t know if they become good pro players. I think Rodgers is in that same mold.”

Moving on, the Packers are favorites heading into this matchup against the Giants at Lambeau Field. The spread is sitting at 4 1/2 on Bovada. But, this game can swing either way. The Giants should never be counted out, just ask the New England Patriots. Veteran QB Eli Manning turns into Joe Montana in the 4th quarter. If the Giants are hanging around come postseason, you bet you are in for a ride. Look for a close game with a hail mary in this one, expect this to be a nailbiter. You bet Odell Beckham is looking to try out a new TD dance he may have learned from Justin Beiber over NYE. Or maybe some moves from the dozens of soccer players he partied with in the offseason.