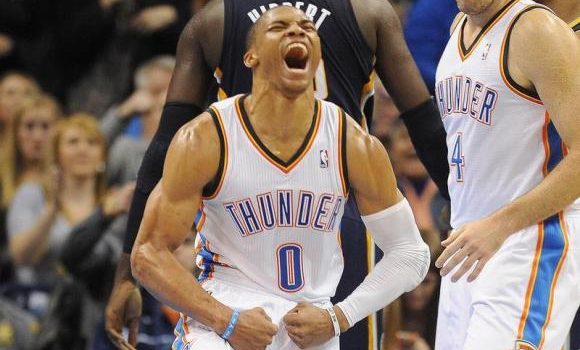 Befuddled. Confused. Shocked. Appalled. Dismayed. I could go on and on. However, I think you’ve got the point. Russell Westbrook’s All-Star snub is beyond reason. How can a player who has averaged a triple double over his first 44 games of the season not be nominated? Is it the new system in play?

With the old voting system, the starters were determined by social media. The NBA decided to change that, due to potential ballot stuffing or celebrities campaigning for their player. Now, 50% is determined by fan voting, while fellow players and media account for equal parts of the other 50%.  Therefore, instead of fan/social media bias, we can exchange that for league bias. The change was supposed to bring balance to the voting process. Epic fail.

Mo Williams received votes from players (he hasn’t played a game all season), as did Kris Middleton who tore his hamstring in September. Other names that received at least one vote, were Malik Beasley, Jordan McRae, Michael Gbinije, and Randy Foye. Hmm….fair and balanced. No disrespect to any of the aforementioned players, but they are certainly not All-Stars.

Russell Westbrook has more than stepped up after Kevin Durant left the Thunder in the offseason for greener pastures. He has taken on a leadership role, and with that is having his best season. Westbrook has since passed Lebron James on the career list for triple doubles and is on path to break Oscar Robertson’s record as All-Time Triple Double Leader at 181. In December, he joined Oscar Robertson as the only players to notch 30 triple-doubles in a calendar year. Now, Robertson played for 14 years, Westbrook is in his ninth season. Westbrook currently sits at 56, he has 21 this season, due very much to his usage going up with the departure of Durant. If Westbrook were to play another 5 years and average 25 triple doubles in a season, he would become the All-Time leader. Now, this is all hypothetical. Westbrook would have to keep the pace and stay healthy. But, the future is looking bright.

Why again was he snubbed for the All-Star Game? Does the blame fall on the fans? The players? Or the media? I can’t imagine the media is blinded by the magnificent play of Westbrook. Media is supposed to have some objectivity (media in the sports realm anyway). So, the blame lies solely on the fans and players.

Either way, I am sure Westbrook is not losing sleep. If anything, a true competitor that he is, expect Westbrook to go beastmode for the rest of the season to silence his critics. Ice in his veins and death stares to anyone standing in his way.

Former and current players expressed their shock on Twitter to the epic snub. 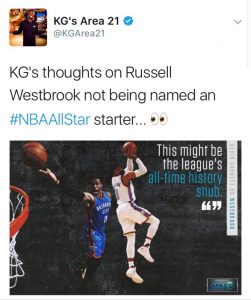 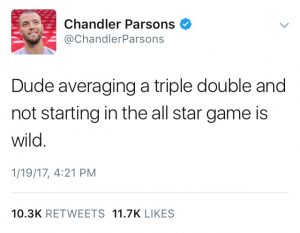 Russell Westbrook responded to his snub telling reporters; ” I don’t play for All-Star nods or All-Star bids, but to win championships…”

That is, after all, the ultimate goal. Still, on his road to the elusive championship, personal recognition for his accomplishments must be acknowledged.