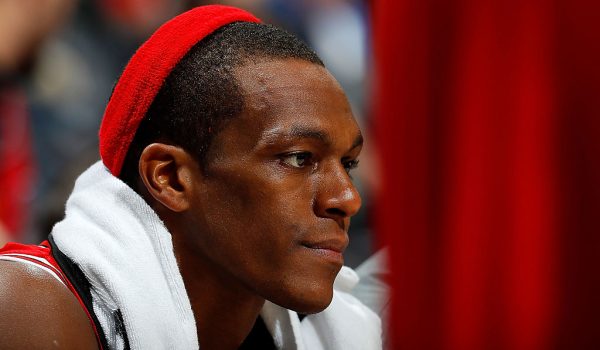 There seems to be a divide between what defines a “cancer” in a clubhouse or locker room. In the last few years, Rajon Rondo’s name has been the subject of many conversations regarding his behavior in the clubhouse, attitude, or just overall fit on the teams he has played for. From his time on the Dallas Mavericks to his current team, the Chicago Bulls, Rondo has made waves. But, is it as simple as him being a “cancer”? Or is it more complicated than that?

When I think of examples of players that have been a “cancer” in the clubhouse I think of Gary Sheffield, Carl Pavano, Kevin Brown, and Milton Bradley. All strong cases. From violent outbursts, distractions, selfish attributes and on and off-field distractions. Gary Sheffield and Milton Bradley played for eight different teams. Kevin Brown played for six and Pavano for five. The stories surrounding these players vary, but they have all at some point been a detriment to their team.

Rajon Rondo has had the term follow him since his time with the Boston Celtics came to a close. His brief stint with the Dallas Mavericks was a disaster.  The Mavericks alleged that he quit on them and sources claimed they made up an injury to bench him out of frustration. He then took his talents to Sacramento, where he had another short stay for just one season. Rondo appeared to mesh well with DeMarcus Cousins and Rudy Gay, yet still, he didn’t quite fit. Clearly, both the Kings and the Mavs still have a lot of work to do on their road to a championship, Rondo, or no Rondo. On to Chi-Town.

Not since the Michael Jordan era have the Bulls had a championship caliber team. The storied organization is currently in a 19-year drought. The Derrick Rose experiment failed miserably, and the organization is desperate to rebuild and find the magic it once had. Bulls brass made moves in the offseason and acquired Rondo, along with Dwyane Wade and Robin Lopez to join Jimmy Butler in hopes to bring the team back to being a legit competitor. How is it going so far?

It starts at the top. Lack of leadership and control over his team, Fred Hoiberg is getting a quick lesson that coaching in the NBA is a different beast.  Lack of leadership and communication between the veterans, Jimmy Butler, Dwyane Wade and Rajon Rondo. Instead of hashing it out in the locker room they take to social media, the new norm, to criticize the team and each other. Most importantly, lack of chemistry, the number one killer in all locker rooms.

Rondo’s Instagram outburst had some truth in it. Sure, spectators see what they choose to see. Yet, anyone with two eyes could see the chemistry and solid leadership the Boston Celtics had during Rondo’s tenure. Aside with occasionally being a hothead, Rondo had fit in like a puzzle piece in green. Garnett and Pierce had control of that locker room, holding themselves accountable and not placing blame. They set examples for the rest of the team, and the team followed.

Calling Rondo the “cancer” in this situation would be unfair. This time his words ring true. 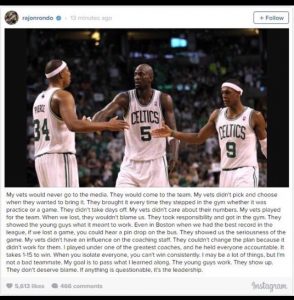 Whether you are a fan, a hater, or neither, Rondo put his cards on the table and revealed his hand. The Bulls had a meeting the next day…to be a fly on that wall. The tension in that locker room must be palpable.

Meanwhile, boo birds are chirping from the stands while the Bulls ride their three-game losing streak into Philadelphia. Looks like the Bulls will be quite busy this off-season.