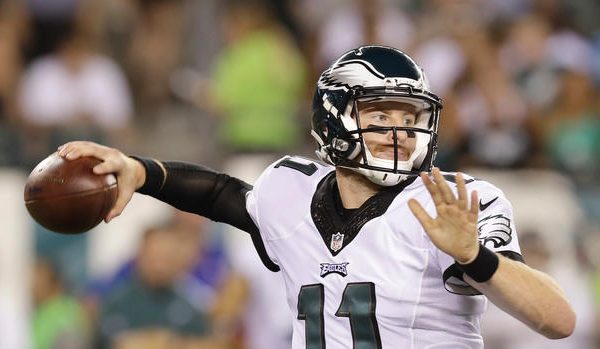 Here we are a quarter of the way through the 2016-17 NFL season. Deflategate is finally over and  Tom Brady is back in Foxboro. Philip Rivers and the Chargers are reeling, while the Minnesota Vikings are 5-0 on top of the NFC North. The new look LA Rams have been a pleasant surprise settling in nicely to their temporary home at the Coliseum. Meanwhile, down in South Beach, the Dolphins are hanging out in the basement. The 2016-17 NFL season is in full swing. My thoughts as we head into week 6.

Why start there you say? Why not start with last season’s Super Bowl Champions? While Hall-of-Fame QB Peyton Manning spends his retirement becoming a commercial staple, starter Trevor Siemian has locked down the starting position in Broncos country. The Bronco’s defense hasn’t lost a step since last season and the running game has been solid. If you haven’t scooped up Devontae Booker in your fantasy league yet, you are sleeping. Barring any injuries, particularly on defense (Donald Stephenson should be returning this week), the Broncos will be playoff bound, how far they go is anyone’s guess. At 4-1, the Broncos have a week 6 matchup against the “never can catch a break” San Diego Chargers in San Diego. Quite the rivalry has developed between these two teams, with the Broncos usually getting the best of the Bolts.

Speaking of the Chargers, let’s take a trip down to SoCal. Five-time Pro Bowler Philip Rivers will retire as an above average QB, in the hypothetical tier of QB’s in the current era, Rivers would be on the second tier,  the ultimate competitor with an average arm. The Rivers led Chargers have had their opportunities, and have continued to squander them. This year has been no different. The Chargers have had no problem scoring points this season. Even with the loss of Keenan Allen and Danny Woodhead, further adding to their strife, the Chargers have made due. Between Travis Benjamin, Melvin Gordon and second-year receiver Tyrell Williams, there has been no shortage of points. Turnovers and poor defense plague the Chargers. In the middle of blowing leads, Philip Rivers is watching his window close on his opportunity to win the Super Bowl. Right now, the odds are 200-1. Don’t call your bookie anytime soon.

The Packers are underachieving at the moment. Underachieving at 3-1, not a bad thing. The Packers have faced the Jaguars, Lions, Vikings, and Giants. Their only loss coming to the Vikings by three points. For any middle of the road team, all of what I just mentioned here appears fine, no worries here. Yet, there is. The Packers, an offensive juggernaut are timid. Even with Jordy Nelson leading the team in TD’s, Rodgers has not connected with his star receiver with ease in the way he did before his injury. P90X champ Eddie Lacy has not lived up to the high expectations set for him in the off season, but he is already on pace to top his dismal 2015-16 season. The problem hasn’t been the protection for Rodgers. His offensive line has done their job. In week 5, he had an average of 3.39 seconds per throw. Finding a receiver open, that is a whole other story. It’s still early, but expectations are high. We have yet to see the dominant Packer offense.

Carson Wentz. The 3-1 Eagles had a shocking loss to the Lions after their easy wins against the Browns, Bears, and Steelers. 23-year-old rookie Carson Wentz is easy to root for. Wentz who this week dropped a $500 tip in his old college haunt has brought life back to a stale Eagles team. An organization full of pride and rich history, Eagles fans have been patiently waiting for the Wentz train to roll in. It has arrived. The 6’5 QB out of North Dakota State heads into week 6 without lineman Lane Johnson, who has commanded a OL that has protected Wentz and helped the rookie go 3-1. Rookie offensive lineman Halapoulivaati Vaitai will get his first start Sunday in place of Johnson. With arguably the toughest remaining schedule on the season, there are challenges ahead. The Matthews duo will have to step up. Wentz, who has only thrown one interception on the season will have to deal with adversity as a starter that he hasn’t had to deal with before. The rival Redskins are up in week 6, followed by the dominant Vikings.  The real test has begun for the Eagles.

When starting QB Teddy Bridgewater went down in the opener most thought the Vikings would be toast. QB Sam Bradford stepped into the role behind a defense that has been a force to be reckoned with. Vegas has the Vikings at an 8-1 odds to win the Super Bowl. 8-1 odds to win the Super Bowl behind Sam Bradford, bet no one would have thought that. The Vikings defense is allowing a league-low 12.6 pts. per game. The solo remaining undefeated team in the league, the Vikings have a bye week in week 6. A week to rest before they play the Philadelphia Eagles. Bradford is undoubtedly up for the challenge. Drafted by the Rams in 2010, it is not surprising he didn’t do well there. The lowly Rams went 1-15 the year before they drafted him. Bradford’s mechanics have been compared to Philip Rivers, he has great accuracy and solid pocket presence. The Eagles have no idea when Adrian Peterson will be back on the field, Bradford has to rely on Diggs, McKinnon, Patterson and Rudolph for offense. They have a pretty tough schedule ahead of them, however, they have already proven to be a team that can handle adversity.

Big Ben is in the house. On my tier scale of top QB’s of our generation Ben is on the cusp of top and 2nd tier. One of the toughest QB’s the game has ever seen, Ben has multiple weapons this year to bring him to the promised land. One of the top teams in the league, the Steelers have been plagued with injuries. Roethlisberger thinks he knows why, he told 93.7 The Fan, per the Pittsburgh Post-Gazette. “I think a lot of our stuff stems from we’re one of the most physical football teams in training camp, in practice, you know. We do more hitting than most teams do and more (practices in) pads.” A great deal of those injuries have been to the offensive line. With offensive weapons Antonio Brown, DeAngelo Williams, Markus Wheaton, Le’Veon Bell and Sammie Coates at your service, protection almost guarantees a victory. The week 6 matchup against the Dolphins should be an easy win, or one would think. The week 7 matchup will not be an easy ride, their opponent is the New England Patriots.

Speaking of the Patriots, Brady’s back. In case you live under a rock, never heard of ESPN, or live nowhere near New England, I’m here to inform you, Brady is back. Deflategate is officially over. Brady’s return to glory began against the lowly Cleveland Browns in which the Patriots beat them 33-13. The next four games won’t be a get out of jail free card, the Patriots face the Bengals, Steelers, Bills, and Seahawks. The Patriots defense so far has been an enigma, their run defense was tested against the Bills, the only game they lost. The Bills made the Patriots look lost, amateur. However, we all know that is the not the case. Belichick and crew always find a way to adjust. The defense will give up a score or two, but the offense will prevail. With plenty of offensive weapons around and a stout offensive line, Brady has time and opportunity to pick apart defenses and distribute the ball evenly. They may lose one game out of the next four on the schedule, and it won’t be to the Bills again.

Rock bottom. That seems to be the consensus around the league. Ryan Tannehill needs to go. Is he the sole problem? No, of course not. The problem is systematic. When is the last time you witnessed a competitive Dolphins team? It’s been years, 2008 to be exact, the last time they were in the playoffs. Arian Foster was picked up in the off-season, a move I laughed aloud too. Foster cannot stay healthy. A star college athlete does not always transition into a star pro athlete. With Foster the talent is there, longevity is not. There are other offensive weapons on the Dolphins squad like Jarvis Landry and Jay Ajayi, but none of that matters when you have poor pass protection. Tannehill has been very vocal about the issues on the team, mostly about the OL, does not matter who you are, a QB will have little success without protection. However, Tannehill’s ability to move in the pocket, anticipate and make decisions falls on him. Sad times down in Miami. Hiring the Bears offensive coordinator as head coach probably wasn’t a genius idea either. The Bears haven’t exactly been a beacon of success in recent years.