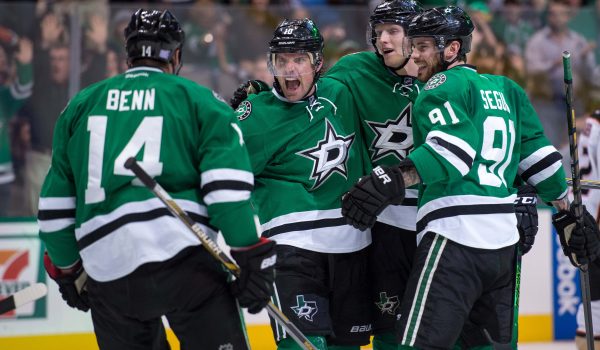 Strap on those skates and remove those fake teeth because the new NHL season is about to begin.

With the last season ending in the hands of the Pittsburgh Penguins, teams went head first into building a championship roster. There were some bold moves this offseason leaving many to wonder who will be the top contenders.

Below are five teams to pay attention to this season. Their trades made the team look good on paper. And you just never know, they might surprise us all in the end.

It might sound weird to say, but since the Islanders won their first ever playoff series last year, they may have something going for them. Of course, I’m setting low standards, but the Isles have proven themselves. This definitely rang true during the offseason.

After losing Kyle Okposo, RW, and Matt Martin, LW, the Isles needed some aggressors to light the lamp. They got lucky with the addition of Andrew Ladd, LW. Ladd’s experience will bring a much-needed dominance to the game along with the Isles’ captain, John Tavares. It didn’t help the Isles, however, when they waived P.A. Parenteau last week. That line would have made a difference to the team.

A couple things could hold the Islanders back from the playoffs this year. One is their goaltending. After Jaroslav Halak suffered a groin injury late last season, Thomas Greiss stepped in. The problem is who exactly do they play. To add more insult to injury, the Isles used this offseason to acquire a young Jean-Francois Berube. If the bench cannot find a starting goalie, it could mean trouble. Another problem was age. Granted, the mid-30s are not old, but the Isles did not seek out for youth this offseason. Besides Ladd, who is 30, the other key additions were over 35. But who knows, perhaps their experience will be a learning lesson for the team.

The big news out of Edmonton was the blockbuster trade of left winger Taylor Hall. The first overall pick has been with the Oilers since he was drafted in 2010. It was expected Hall would possibly leave the team in a few years, but not this soon. However, you cannot blame the Oilers for trying to build a stronger team that did not revolve around Hall.

With that trade, the Oilers were very busy during the offseason. For Hall, the Oilers acquired Adam Larsson from the New Jersey Devils. It was not a fair trade in the slightest, but Larsson has a strange ability to step up when he’s needed. The Oilers also added Milan Lucic to their roster. Lucic may not bring the speed the Oilers need, but his power will definitely be felt on the ice.

This team could have a pretty decent year after their change up over the past couple of years.

But in reality, the Oilers may need another year or two before they really “wow” us.

The Predators were involved in another major move after Shea Weber, D, was traded for Montreal Canadien defenseman, P. K. Subban. Like Hall, Weber and Subban had been with their teams for their entire 11- and 7-year careers, respectively.

For such a big name in the hockey world, Subban has such a quiet, yet quick presence on the ice. He may not be a goal scorer, but he knows how and where to set up a shot. This will give the Predators more possession of the puck. It’s rumored Subban could be matched up with Roman Josi making them the top pair. This matchup may lead to Subban having his best season and a career high in points.

The Panthers were already a dominating team despite being knocked out in the first round by the Islanders. Yet, their offseason moves added more consolation they will be a top contender.

It’s hard to determine who will be the major force to propel this team forward. That’s how talented this team is. Do you look to 21-year-old Aleksander Barkov or 44-year-old Jaromir Jagr to lead the team in scoring? Do you look towards new additions Keith Yandle and Jason Demers to bring the readiness and quickness to the blue line during the power play? How do you choose who goes in the net between Roberto Luongo or Jason Reimer?

This team has calculated every move in case something falters. There will always be backups. If this team can stay healthy, it’s going to be hard to stop them.

Pegged to win the Stanley Cup this year, the Stars have a lot riding on their shoulders.

They did not make any major moves during the offseason, despite the need for a healthy goaltender. Kari Lehtonen and Antti Niemi, both goalies, did not give their best performances last season. Each of them posted save percentages far lower than the league’s average. It’s unclear how comfortable or ready these two are. If the Stars can at least build a strong defense line, the goaltending should be fine. However, the blue line should not always have to save the day for the goalies.

One thing that is clear is this team needs to stay healthy for the season, especially before the playoffs. Case in point, Tyler Seguin. He suffered a partially-cut Achilles tendon in mid-March causing the entire team to lose its ability to play.

However, if Seguin and linemate, Jamie Benn, can bring back that power and chemistry that lead them to win the Central Division, there’s no turning back. This dynamic duo is the heart of this powerhouse team. Once they get into the groove, the rest of the team follows.