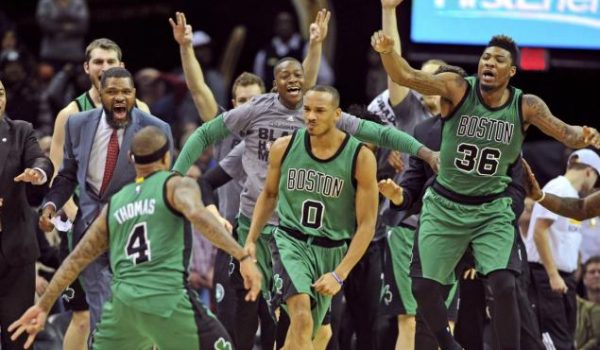 The Boston Celtics are up 3-2 over the Washington Wizards in the second round of the NBA playoffs. Friday they play Game 6 at the Verizon Center in Washington, D.C. The games have been filled with typical Celtics drama that we have become accustomed to seeing from this team, as well as Celtic teams from the past. Epic come-from-behind-wins, slow starts, trouble establishing rhythm and consistency have been hallmarks of these playoff games. In the end, both teams seem to thrive off of the drama they create and physicality they display on both sides of the ball.  Boston, however, seems to be at their best when they are in trouble.

Yes, Boston is up, but both the games and the series are tight. Boston is scoring just enough to stay on top of Washington. The games have been close, with the exception of 4 and 5. Game 2 saw the teams go into overtime, a wounded Isaiah Thomas overcame a lost tooth, oral surgery, and the birthday of his recently deceased sister, Chyna, to score 53 points, 4 rebounds, and 4 assists. Game 3 and 4 saw players’ jabbering jaws and fatigue showing on both sides of the court. Players vocalized their feelings to fellow players and fans. Isaiah endured a $25,000 fine due to his back and forth with a fan during Game 3.

Thankfully Coach Brad Stevens is able to cut through all the player-related drama to get the job done. Stevens has the knack for putting the right man in the right place at the right time. Jaylen Brown, Terry Rozier, and Gerald Green have contributed in one way or another after playing few minutes during the regular season. Each player is on the roster has put in the time and effort to be ready when called upon by Stevens giving the Celtics the depth that could give them the ability to dominate late in games. Washington does not have the bench depth that Boston does. The Wizards were successful in game 4 because four of their starters scored in double digits. Bojan Bogdanovic who has been hot and cold throughout the playoffs scored 13 off the bench. Four out of the five starters had increased playing time, with Beal leading the pack with  37. The Wizards will need more consistent production off the bench if they want to win this series. Certainly, the hostile hometown crowd did not hurt either.

Thankfully the grip Boston has had on the series only let up for a moment. In Game 5, the Celtics rebounding and ball movement steadily continued to improve as they learned more about their opponents. The Celtics are averaging 27.5 assists per game. Earlier in the regular season, assists and rebounds were an issue, but not anymore.  In Games 2, 3 and 5, the Celtics covered the boards and the paint much better. The biggest game changer has been Al Horford. Over the course of the postseason, Horford has come alive, convincing many naysayers (including myself) of his talent. In game 5, Marcus Smart rebounded for double digits and helped to create opportunity and space for shooters Jae Crowder, Avery Bradley, and Thomas to score.

While Smart and Bradley stood out in Game 5, it really was a team effort. This was never more true than during Game 5 where Thomas seemingly sat back and allowed his fellow teammate to shine together. The statistics show it with a nearly even distribution of over 18 points for Crowder, Bradley, and Horford. This is a good example of Coach Stevens use of the deep bench and key pieces at the right times.

Everything may sound rosy, but Game 6 is a big game for the Celtics. They must put on their road dog hats to close out this series. The Wizards are a formidable, physical team. John Wall is a force to be reckoned with on both sides of the ball. He scored 40 points and had 13 assists in Game 2 and 24 points with 8 assists in Game 3. He is a tall task for Thomas and his teammates to control. Gortat is also a phenomenal player who consistently tops his team in rebounds. Otto Porter Jr. is not afraid to do whatever it takes to secure the ball. Fans saw him get caught up in traffic under the basket and in the paint. In Game 1, Potter came crashing to the ground elbow first in the first half, and in the second he caught an elbow which lead to a game-ending bloody nose. What a baller!

The Celtics showed up to the Verizon Center ahead of Game 6 dressed in all black, setting the stage for the “funeral” of the Wizards. Sound familiar? The Wizards did the same thing to the Celtics in January, but this is a much bigger stage with higher stakes. No secret there is bad blood between these two teams. Will the Celtics be able to back up their bold statement?

Any which way you slice it, it will be a battle for both teams to the end of this second round. The best team will stand tall at the end, hungry for the Eastern Conference finals and ready for their next opponent, the Cleveland Cavaliers.