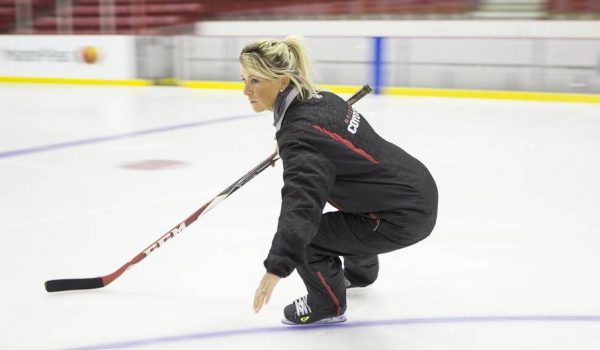 For the first time in NHL history, a female will serve as a full-time coach.

“It’s something that I’ve wanted to see happen,” she said in a statement released by the Coyotes. “The fact that they respect what I do enough to name me as a full-time coach, or to name me as the first female coach in the NHL, I take a ton of pride in that. I’ve worked very hard for this opportunity. It’s been going on for years and I just look forward to going even further with it.”

Braid is no stranger to the national level of hockey. Over the years, she has worked as a skating consultant with the Toronto Maple Leafs, Anaheim Ducks, Buffalo Sabres, and Calgary Flames. She also worked part time with the Coyotes last season.

The NHL has noticed her impact on the league when it comes to their players. For seven years, Braid was the director of skating development at Athletes Training Center in Mississauga, Ontario. Braid has taught and instructed dozens of players, some of whom play in the NHL. One of those players is New York Islanders captain, John Tavares.

“Dawn has wanted to put me in to make myself a more powerful and efficient skater,” Tavares told NHL.com in 2012. “Dawn always says, ‘If you didn’t train properly and do the certain things you need to do, you’re not going to be strong enough to do the things I want you to do.'”

The hiring of Braid only solidifies the impact women can have within men’s pro sports. Braid is not the first to receive this title of “full-time coach.” There have been a handful of trail blazers. Unfortunately, this has only recently started a couple years ago.

Back in 2014, Becky Hammon, former WNBA player and Olympian, was the first to break into the men’s world. The San Antonio Spurs took a risk and hired Hammon as a full-time assistant coach. This title made Hammon the first ever full-time female coach in the NBA and the first in men’s professional sports. Hammon broke ground. In 2015, she was named the first female head coach for the Spurs during the NBA’s Summer League and ended up winning the title. She also became the first female to participate on the coaching staff during the 2016 All-Star Game.

That was only the beginning. A year after Hammon’s announcement, the Sacramento Kings named the legendary Nancy Lieberman as their assistant coach. Lieberman, nicknamed “Lady Magic”, entered this job as a former player and coach of the WNBA, Silver-medal Olympian, and a hall-of-famer.

The NBA is not the only sport making headlines. The Arizona Cardinals temporarily hired Jen Welter as an assistant coaching intern during the 2015 training camp. Welter also made a dent when she became the first female running back on a men’s professional team for the Texas Revolution in the Indoor Football League.

Women have been making their mark in non-coaching positions. Sarah Thomas became the first female official in the NFL after several years of officiating in college football. Jessica Mendoza became the first female analyst for an MLB game. This led Mendoza to join Dan Shulman and Aaron Boone in broadcasting for Sunday Night Baseball.

Here’s to the women who are leading the way and proving us females actually know a thing or two about sports. Well enough to coach these men.