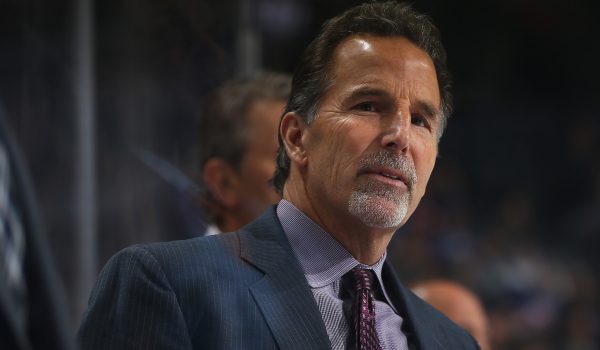 The Colin Kaepernick “scandal” has made its way into the hockey world.

I personally could care less about that story. But now that John Tortorella has thrown his hat into the mix, now my interest is peaked.

Tortorella, who will serve as the head coach for Team USA during the 2016 World Cup of Hockey, was asked by ESPN’s Linda Cohn on how he would handle a protest if it were to occur. He made clear he would bench the players.

“If any of my players sit on the bench for the national anthem, they will sit there the rest of the game,” Tortorella said.

Cohn’s question is an obvious response to several athletes, including Seattle Seahawks cornerback Jeremy Lane and American soccer player Megan Rapinoe, supporting Kaepernick’s decision. And seeing how these 23 players will be representing the country, a possible boycott could damage their character.

Whether or not you agree with Tortorella, he does have a reason to back up his statement. His 26-year-old son, Nick, is an Army Ranger. He is currently in the Middle East, but his whereabouts are unknown. Since his son joined four years, Tortorella has a whole new perspective when it comes to the United States, military, flag, and national anthem.

“It is probably the most disrespectful thing you can do as a U.S. citizen is to bring that in. Because that’s our symbol. All for [expressing] yourself. That’s what’s so great. Everybody does. But no chance when it comes to the flag and the anthem. No chance,” he told reporters during Wednesday’s practice.

Because of his respect for his son and the armed forces, an Army Ranger will be on the bench with the team during today’s pre-tournament game against Canada.

However, the likelihood of witnessing this action is slim to none. Like most international events or competitions, the national anthems are not playing at the beginning of the game. Anthems are usually not played until a certain point in the tournament. Similar to the Olympics, the teams will not hear their nation’s anthem until they win. And that will be after the game. So if any players want to boycott the national anthem, they will have no fear of being benched.

Tortorella is also the head coach for the Columbus Blue Jackets. Though it’s not a national team, his stance on this issue could continue when the NHL regular season begins.

Do you agree or disagree with Tortorella’s statement? Let us know.