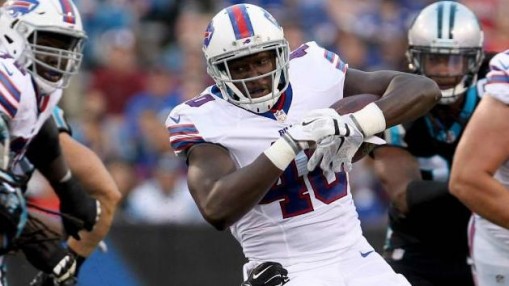 Devonta Freeman vs. Houston: Freeman had a breakout week against the Cowboys when he dismantled their defense. On Tuesday evening, the Falcons updated their unofficial depth chart and changed Freeman to the starting running back. Freeman’s vision and athleticism are sure to make him one of the top RB’s in the league for years to come. Falcons are home and are looking to stay unbeaten. Texans defense stepped up in their last game against the Buccaneers, but don’t expect them to do the same against the explosive Atlanta Falcons. Texans D won’t have an answer for Jones and Freeman.

Tyrod Taylor vs. Giants: For the price point on DK and Fanduel, Taylor is a bargain. Taylor has been a pleasant surprise for those playing season long fantasy that took a gamble on him or scooped him off the waiver wire. Despite suffering from a minor ankle injury in Week 3’s matchup against the Dolphins, Taylor is expected to play. Taylor has been impressive and has put up consistent fantasy numbers from week to week. His running skills set him apart and he hasn’t even showcased them yet. Bills coach Rex Ryan has been a fan of Taylor since Taylor was Flacco’s backup in Baltimore. Taylor’s speed, his impressive arm strength and leadership qualities ensure that he will be the Bills starting QB for the foreseeable future. The Giants have allowed an average of 18.4 pts. to the opposing QB.

Andy Dalton vs. Kansas City Chiefs: The duo of Dalton and Green provides one of the top fantasy matches in the NFL. Dalton threw for 383 yds against the Ravens in Week 3. Dalton should have no problems crushing the Chiefs weak secondary. The Chiefs have allowed the most fantasy pts. to a QB with an average of 25.04.  Expect a top fantasy showing of this dynamic duo.

Chris Johnson vs. St.Louis Rams: If Andre Ellington remains out in Week 4, Johnson is a must play. The Rams have allowed an average of 22.73. According to Alex Marvez of Fox Sports 1, Cardinals coach Bruce Arians suggested that Johnson will remain heavily involved in the running game. At $4,500 on Draftkings, Johnson is a steal.

Brandon Marshall vs. Miami Dolphins: Coming off an embarrassing loss to the Buffalo Bills, the Dolphins head into a tough division matchup against the New York Jets. Despite an embarrassing lateral pass turn fumble, Brandon Marshall has been consistent. He has eclipsed over 100 yds in the last two games and is one of the top contributors on the Jets. The Dolphins have allowed an average of 25.90 pts to opposing WR. The Dolphins don’t have anyone that can stop Brandom Marshall from getting his fair share of yardage.

Ryan Tannehill vs. New York Jets: Although, I like Brandon Marshall, I am usually hesitant on picking anyone from a game being played in London. The travel time and time difference does not seem to be beneficial. Anyway, surprisingly, Tannehill is pricier on DK than Andy Dalton and Tyrod Taylor. His fantasy numbers don’t warrant that. The Jets defense has only allowed on average 9.2 pts to the opposing QB. That stat does not fair well for the 1-2 Dolphins.

Marshawn Lynch vs. Detroit Lions: While the Seahawks are heavy favorites to pummel the struggling Lions on their home turf this week, I wouldn’t risk taking a chance on Marshawn Lynch. At $7,200 on Lynch, the price point is much too high for a player that at present time is a shell of the player he used to be. He has averaged under 10 fantasy  pts. in the last two games. He also has a nagging hamstring injury that keeps creeping up. I would stay clear of Lynch this week. There are better options at his price point and under.

Doug Martin vs. Carolina Panthers: I was high on Doug Martin before the season started. He had a good training camp moreover, finally healthy. Martin has done nothing but disappoint. He hasn’t posted over 10.8 fantasy pts. on DK in the first three games. The Panthers run D has been solid. Don’t expect Martin to turn around his season in this matchup.

Detroit Lions: I would stay away from anyone on  the Lions this week. I fully expect the Seahawks to dominate at home against the 0-3 Lions. Seahawks defense has only allowed an average of 15.02 fantasy pts. to the QB position. Stafford has only hit 20 fantasy points once on the last three games. The Lions cannot seem to get anything going and have been one of the worst offensive teams in football in the last three weeks.