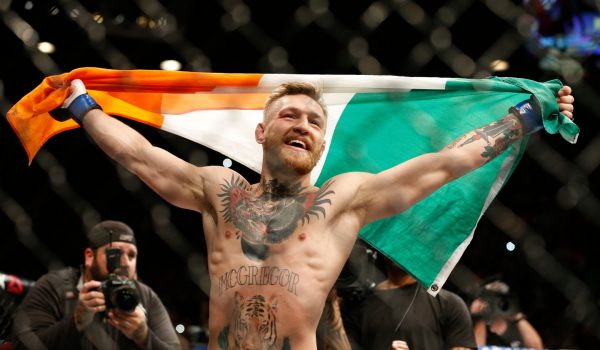 I am not sure what it is going to take for UFC to get the respect it deserves, from the mainstream as well as athletes from other sports, mainly boxing. Boxing legend, George Foreman said this to Jake Brown from CBS Sports Radio about MMA fighter Conor McGregor; “The other guy, no one even knew his name and now he keeps flirting with the idea of him fighting Floyd Mayweather.”

Hmm, the other guy. The other guy whose net worth is $22 million and is the highest paid MMA fighter. With all due respect to Foreman, lord knows he deserves it, McGregor does not need Mayweather for people to know who he is, he has made quite a name for himself without him. Foreman, like many others, in the sports world is ignorant to the prominent rise of UFC.

Foreman who finished his career with 76 wins, 5 losses, and 68 knockouts had a lustrous career. Yet, something tells me that he doesn’t watch UFC fights in his spare time, or watch TV, or go on social media….Because, unless you are living under a rock, you know who Conor McGregor is.

The Fertitta Brothers and Dana White purchased UFC in 2001 for $2 million and sold to a group led by talent agency WME-IMG for $4 billion in 2016. The growth has been exponential. Despite a slow start to 2017, UFC is on path for even larger growth.

Boxing, a sport that has been dead in the water for some time is no doubt one of the largest voices behind a potential matchup between Mayweather-McGregor. Mayweather has no competition, his last few fights have been a snoozefest, and the long-awaited matchup that took place between Pacquaio and Mayweather was a disgrace to the sport. The sport of boxing is a fraction of what it was years ago.

There is no doubt those behind the scenes see the success of UFC, see the fall of boxing and are thinking of a way to bring the two together.

Still, a matchup between McGregor and Mayweather makes no sense. The rules would be in favor of Floyd. McGregor is an MMA fighter, sure he is a skilled boxer, but he also has other tools under his belt that have helped him rise to success in his sport. On the flip side, Mayweather has no skill outside of boxing. Yet, we would be watching an overhyped, overpaid boxing match, which has become Mayweather’s specialty. Sure, the pre-fight shenanigans would be epic, if you like that sort of thing. There is no doubt these two personalities match up well with their excessive lifestyles and epic trash talking. Yet, the fight itself would be a disaster.

MMA gets criticized for the “brutality” of the sport and the demographic that watches it, two criticisms I hear often.

Maybe if those people took the time to appreciate the training and technique that these fighters work for years to perfect, they would be able to see the sport in a different light and look past their hangups.