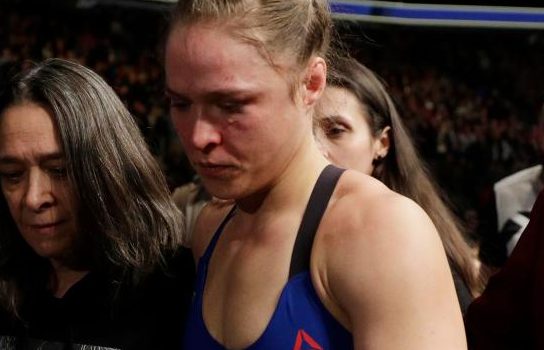 Ronda Rousey was fierce, arrogant and intimidating. Bursting onto the scene in 2012, Rousey was the first UFC Women’s Bantamweight Champion. From 2012-2015, Rousey was a powerhouse, considered the best female in the sport, she drew a large audience and gained popularity globally. Her signature move to beat her opponent is submission by armbar, with all but 3 of her 12 wins at a pro level being by that method.

Once known as the best in the biz, Rousey has hit rock bottom. She is no longer feared by her opponents and admired by her peers. She has revealed herself to be a fraud, something that was evident to me shortly after her crushing loss to Holly Holm.

Heading into the Holly Holm fight, Rousey played the role well. She was a shit talker, cocky with a sense of invincibility, so much so, she could have given Conor McGregor a run for his money. Who could blame her? She was on top of the world. Considered unrivaled at her position, wins came easy to her, it is no wonder Hollywood came calling. $$$ A dominant female in UFC is marketable gold, especially a charismatic, attractive, hard ass like Rousey.

Rousey’s excels at the ground game, no secret there. Get her opponent on the mat and the fight is over in seconds. Against an accomplished striker, Rousey is at a severe disadvantage. Not sure if Rousey got that memo before heading into the fight with Holm, it appeared as though she walked into that fight with little prep, subsequently underestimating her opponent. With a swift kick to the neck and a series of punches, Rousey’s reign as a champion came to an end. After the fight, Rousey went into hiding. Reports of how she contemplated suicide after the loss circulated. The fierce, arrogant intimidating powerhouse was no longer that. She came face to face with someone that wasn’t showboating a persona, but a fighter that wanted to win.

Rousey was medically cleared in Dec of 2015, less than a month after the fight. Instead of getting back in the gym, Rousey turned to Hollywood, clearly showing to the world where her priorities lie. Nothing wrong with wanting to build your brand and earn more money, however, not when you are pushing aside the one thing that brought those things to you. There will be plenty of time for that when you retire…..AS A CHAMPION.

It takes more courage to rebound from a loss with that same fierce spirit, then to slink down and feel sorry for yourself. The competitive spirit is its own beast.

For a year, rumors circulated involving Rousey’s comeback and the word was she was not ready. Then, after over a year removed from the sport, Rousey returned to fight Amanda Nunes on Dec. 30th, 2016 at UFC 207. With very little promotion prior to the fight by Rousey (rumor was she was too busy with movie production), she was uncharacteristically quiet. Some critics said before the fight that her lack of promotion may have been due to her quiet confidence, letting her reputation speak for itself.  Or, the more realistic observation is that she was the exact opposite of confident leading her to keep her mouth shut. There is no coincidence she was vocal before every fight, yet quiet in the first fight since her crippling loss.

Just 48 seconds into the first round of her comeback fight, Rousey was done. Nunes annihilated her with a myriad of combinations. Rousey was outmatched in spirit, speed, intensity, preparedness, and heart. Nunes came at her relentlessly, never letting up.

Rousey looked defeated, a shell of the fighter that UFC fans once loved. Her body language after the fight showed the world all it needed to know.

She is done. She was done before the fight even began. She was done when she chose her “acting career” over training to get back in the ring.

The greatest competitors rebound from a loss by preserving with the same drive that made them compete in the first place.

But, all is not lost. Rousey is still the reason many women decided to become fighters. She set the bar, even though the bar may have been lower than we all expected.