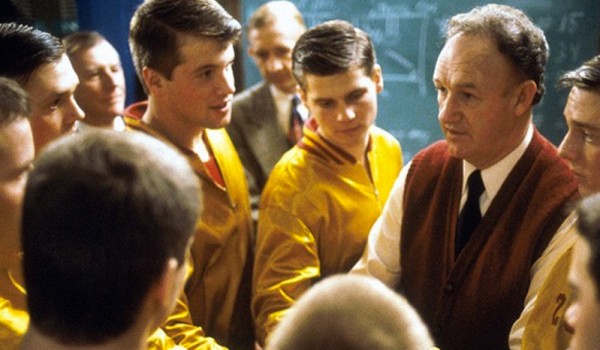 Tweet
While everyone is talking about their favorite Holiday movies, nursing a hangover, relaxing or chowing down on leftovers…I am watching basketball. Pour yourself a beer or a glass of wine and read on, here are my Top 5 Basketball Movies of all-time:

1. Hoosiers
Doubt many will disagree with this choice, but to me it is a no-brainer. Considered by many to be one of the greatest sports movies of all-time, the 1986 film directed by David Anspaugh, starred Gene Hackman as Norman Dale a new coach with a checkered past. It co- stars Barbara Hershey and Dennis Hopper as the lovable drunk in the small town of Hickory. Hopper earned one of the films two Oscar nominations.  Inspired by a true story, the film centers around the 1954 Indiana State Champions, Milan High School.  Hickory shocks everyone, when against all odds beats a team from South Bend whose players are noticeably taller and more athletic. The film keeps you on the edge of your seat, highlighted by the sensational performance of Hackman. It deals with the politics and drama that is not absent in sports at any level. It inspires and proves that obstacles can be overcome on the path to glory.

“I’ve seen you guys can shoot but there’s more to the game than shooting. There’s fundamentals and defense. “ Coach Norman Dale

2. Glory Road
One of my all-time favorites, the 2006 film directed by James Gartner, Glory Road stars Josh Lucas as Hall-of Famer Don Haskins, the head coach of Texas Western College. Based on a true story, Haskins deals with racism and diversity when he coaches a team with an all-black starting lineup at a time when tensions were high. Haskins employs discipline in his players and puts them through a stringent training program. Haskins receives death threats while one of his players is savagely beaten while the team is on the road. With heart, determination and passion Haskins and his talented team quiet the racists and take the world by storm when they beat the top-ranked University of Kentucky. Must see.

” I’ll tell you why. Ever since I was a kid I’ve only loved one thing. That was playing ball. Do you understand what that’s like, having that ball in your hand… It’s like, It’s like making sweet music with your game, only thing is you don’t wanna hear the song.” Bobby Joe Hill

3. Coach Carter
Another excellent movie based on a true-story, Coach Carter stars Samuel L. Jackson as Ken Carter, the high school basketball coach at Richmond High School in Richmond, California. Shortly after taking the head coaching job, Carter sees that his players need discipline. He cares as much about the education of these players as he does the basketball program. He hands out contracts to the boys with a list of requirements, including such things as; respectful language, wearing suits on game days and maintaining a GPA of 2.3 or higher. Carter ruffles feathers and angers some of the boys and their parents. Carter ultimately benches his team due to missed classes and poor academics, creating headlines and alienating himself. After, the boys realize that they can count on Carter and that he really does care about their well being they come to their senses and do ask his asks. The Richmond Oilers end up losing in the regional high school playoffs, but not without learning a valuable lesson.

4. Love and Basketball
This 2000 film combines basketball with a little romance and shows a realistic portrayal of a young couple falling in love surrounded by their shared passion of basketball. This drama stars Omar Epps as Quincy McCall and Sanaa Lathan as Monica Wright, next- door neighbors that learned early on they shared a love for basketball. The two form an unbreakable bond that continues on into adulthood. Their careers take on different turns, with both experiencing ups and downs and learning more about themselves with every turn. After years apart, Quincy is about to marry another woman when he realizes that he cannot live with Monica. The two reunite and viewers get their fairytale ending, hence the title Love and Basketball.

5.He Got Game
Led by the powerful portrayal of a prison inmate convicted of killing his wife, Denzel Washington plays Jake Shuttlesworth. Directed by Spike Lee, Jake is released on parole for a week by the governor to persuade his son, a top-ranked prospect to play for the governor’s alma mater. Jake’s son Jesus is portrayed by future hall-of-famer Ray Allen, who definitely excels in showing his acting chops. If Jake can convince him, he receives a reduced prison sentence. Filmed on the gritty streets of NY, we are exposed to the recruiting process that colleges don’t want you to see filled with offers of gifts, cash and women. The strained relationship between father and son is highlighted and ultimately Jesus decides to go with the school his father wanted him to sign with, but not till after the deadline. Although this film doesn’t end with a typical ending with a big game or the game winning shot, disappoint it does not.

“He got game.” Michael Jordan

*Honorable mentions: Hoop Dreams, Above the Rim and Finding Forrester