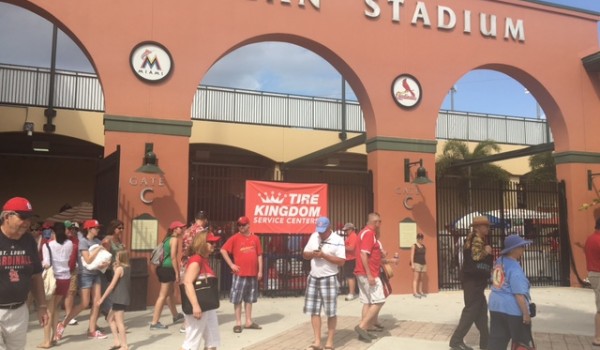 The St. Louis Cardinals appear to be poised for a strong 2016 regular season. That is the sense I got after attending a spring training game on Monday, March 14th. The storied franchise faced the Minnesota Twins at Roger Dean Stadium in Jupiter, Florida. The Cardinals lost to the Twins 3-5.

As a fan, it is easier to be objective when you are not in your favorite team’s ballpark. The purity of the game is restored because all emotional attachments and bias are set aside.

From the outside, looking in, here are my perceived impressions of what this season has in store for the Cardinals.

Mike Leake – Leake will add value to this starting lineup if management gives him a shot. During the aforementioned game, Leake pitched 4 innings,  threw six strikes, allowed one hit, and showed a range of pitches. However, Leake lost control of his fastball when he threw harder than 86 MPH range. His curve, slider were strong, but could be trouble once the batter got a read on him. His 4.05 ERA confirms that he is a reliable arm. He would be a solid fourth or fifth starter for this team filled with top talents Michael Wacha, Adam Wainwright, and Jaime Garcia ahead of him. Leake is proof positive that you cannot judge a player based on his statistics alone. Scouting plays a big role, too.  Just ask Director of Scouting, Randy Flores.

Defensive Shifts – It is clear to this baseball fan that manager Matt Matheny has been working on some shifts with the team. The opposing team, the Minnesota Twins, hit right into the shifts proving the team had some accurate reads on the batter. The more they practice these strategies the more likely it is to work in regular season action. Infielders Greg Garcia and Jed Gyorko, made quick, crisp work of fielding the ball. However, a few line drives up the middle eluded them. Centerfielder, Randal Grichuk backed up the infield during these instances.

Former General Manager, Jeff Luhnow began the process of building their farm system during his tenure from 2003-2011. The trend continued under current General Manager John Mozeliak. St. Louis’ minor league has a number of top prospects, including Alex Reyes, Tim Cooney, and Nick Plummer. This franchise like many other successful ones builds the future of their team at home. It will be exciting to see these names progress in their development. Many are highly ranked by Baseball America. .

Winning teams hit together, and do so consistently. While some members of this team can hit home runs, it is the notable amount of good contact batters that sets this team apart. The Cardinals can play small ball; doubles, singles with runners in scoring position are elements that send teams to the post season. During this mid-week spring training game, Holiday, Matt Carpenter, Garcia and even minor leaguer Justin Hazelbaker (a former Boston Red Sox prospect) hit for contact to score runs.

Holiday played first base during this spring training game, although he is listed as a left fielder on the Cardinals’ website. He is still in the throes of figuring out the intricacies of first base. Two balls were bobbled a bit, body positioning seemed awkward at times, at one point he blocked the ball and picked it up for the tag. But, hey, that is what spring training is for, right? Holiday has good instincts on the field. The stakes at first base are much higher than they are in left. Holliday will get there eventually, but I would not be surprised to see Manager, Matt Matheny place Brandon Moss at first to begin the season.

Peralta tore a ligament in his thumb. He recently underwent the same surgery teammate and catcher Yadier Molina did last year. Peralta and Molina are still recovering from this procedure preventing both of them to make limited plate appearances during Spring Training. Molina reportedly spoke to Peralta and told him not to make the same mistake he did and rush his recovery from the surgery. Peralta will take two months off, cutting into nearly half of the regular season. In 2015, three-time All-Star, Peralta hit .248 and contributed 71 runs earning the Cardinals a trip to the National League Division Series, Undoubtedly, the offense will miss his bat and defensive experience in the infield.

St. Louis looks to have another competitive team for the 2016 season. Perhaps, the biggest asset that the team has is its dedicated fanbase. Living in Boston, I thought Red Sox fans were passionate. We do not hold a candle to the women and men of Missouri who wear head to toe regalia to the games. Hats, shirts, shorts, flip flops, umbrellas, and other souvenirs are worn by all. At one point, I looked down the first base line and saw nothing but a sea of red T-shirts in the stands.

These St. Louis fans warm the heart and secure the future of baseball for future generations of fans.