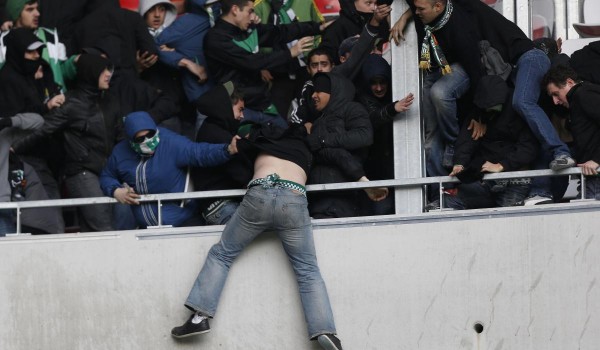 Tweet
The inevitable has happened again. Yet another fan has died for being a fan.
Last week, Steven Simminger allegedly stabbed Colin McGovern for being a Flyers fan. Seeing that they were in Philadelphia, it did make sense that he was. Simminger, who was wearing a New Jersey Devils hat, got into an altercation with McGovern after finding out he was a Flyers fan and eventually stabbed him in the stomach.
We see this way too much; fans taking their love of the game to the next level. Two Golden State Warriors fans gunned down in 2013. Jonathan Denver, a Dodger fan, was stabbed outside AT&T Park. Bryan Stow was beating brutally for being a Giants fan in Los Angeles. Colombian soccer fans were passionate enough to kill one of their own players, Andres Escobar. Even in my own backyard of Nashua, NH, a woman ran over a drunk, college kid because he was a Red Sox fan.
It doesn’t stop.
Not sure if you’re all aware of this, but it’s only a game. Yes, we can get passionate about it. But once the game is over, it’s over. You are allowed to be a fan and know your stats. But to get too much into the game means you have lost all meaning of life.
Remember this, you are a fan, which means you are a spectator. You watch and cheer for your team. However, no matter how many times you call into those radio shows, you do not have a say in what goes on with the team. You do not get to decide which players are on your team or which play to run.
You are nothing but the overzealous parent who has to complain about every play and wonder why your talentless child isn’t on the field. That’s it. You may represent the team’s color, but the players are the team. So if there is any play that upsets them, you should not be disappointed. They are the one’s playing, not you.
Honestly, there are other more important things going on in the world than worrying about making the playoffs. If your team doesn’t make it, great! Now you can get a hobby.
This plea is for all of us to be a fan of the sport. We can have our home team and wear our favorite player’s number. Still, we also need to appreciate the other teams. If you love the sport, you should enjoy watching every game you can.
And as for the fans who get into an altercation. Stand back and rethink your life decisions. Because if this is the one thing making you angry, then you seriously need to walk away from the game and get a life. Not just for you, but for all of us.