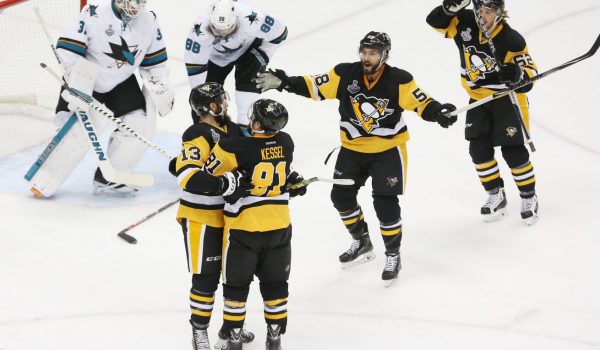 With a little over two minutes into overtime, Conor Sheary flicks the puck passed Martin Jones to give the Penguins the 2-1 Game 2 win over the Sharks. This is the first game-winning goal for the rookie and his second goal in the series.

Pittsburgh had a lot of momentum going in to Game 1 after their 3-2 win over San Jose. Their defense was strong, holding the Sharks back to 22 shots. Their offense continued their speed, which also exhausted the Sharks’ defense.

The biggest dominating factor for the Pens is the “HBK Line” consisting of Carl Hagelin, Nick Bonino, and Phil Kessel. Once again, the power within this line gave the Pens the lead in the 2nd period. After forcing a turnover, Hagelin passes the puck to Bonino heading towards the net. Bonino shoots the puck and Kessel taps it in at the backdoor.

The Penguins held a strong lead until Sharks defenseman, Justin Braun, tied it up 1-1 with 4:05 remaining in the third. With a wicked slap shot, Braun was able to hit the post at the right angle in order for the puck to hit the back of the net. That would be the only lucky chance the Sharks would have with the posts during the game.

Forward Tomas Hertl attempted to get an early lead in the second. After stealing the puck from Bonino from behind the net, Hertl fell and wrapped himself around the net. Penguins’ goalie, Mark Murray (21 saves), watched the puck glide passed him but the puck bounced off the post. Forward Chris Tierney almost tied the game at 4:07 in the third, but the puck hit the crossbar.

The Penguins are a force to be reckoned with. Their strength and speed, compared to the debilitated Sharks, could lead them to their first Stanley Cup since 2009. But in order for that to happen, the Pens have to stay sharp, especially in San Jose. The Sharks have a great advantage on their home ice. They have won seven out of the nine games played in the SAP Center.

The Sharks will only get the win if they compose themselves and get some rest. Hopefully, the two-night rest will benefit their game.