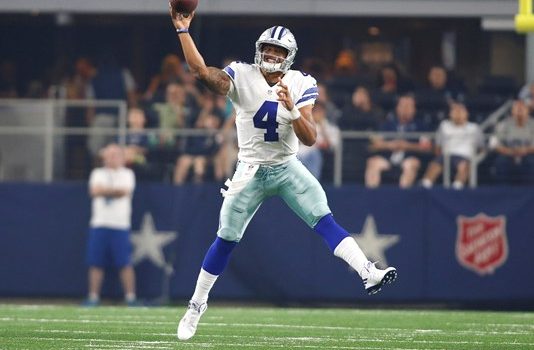 On the day of what should be a national holiday, I ponder my predictions on the upcoming NFL season. Yes, ladies and gentlemen, football is back. Labor Day has come and gone, the summer is over, the hot sun, beach days and BBQ’s, but let’s be real the tradeoff is football, you can’t have everything.

Fantasy teams are set (most of them), and Vegas has set their odds. Now, it’s your turn. What are your thoughts on  the upcoming season?

Below I sound off on mine:

Cowboys: Shortly after Dak Prescott shocked Cowboy fans with his preseason performance against the new look Los Angeles Rams, I gave my prediction that by week 4 Tony Romo would go down with an injury and Prescott would be named the starter. I was a little off in my prediction. The season didn’t even have to start for Romo to go down like a ton of bricks. Enter: Dak Prescott. Let’s face it, Romo is done. He has been for some time now. In 2015, with impressive plays thrown in the mix, Romo threw an ample amount of interceptions and spent more than half the season out with a shoulder injury. An above average quarterback who at times put up gaudy numbers in the regular season never had the clutch gene. I never witnessed the “It” factor in Tony Romo.  Now, here we are, a healthy Dez Bryant and the addition of  a highly touted Ezekiel Elliott (not since Adrian Peterson has a running back emerge from the draft with such praise), and Romo is out with a significant back injury three years removed from back surgery.

23-year-old Prescott was selected 135th overall in the 2016 draft by the Dallas Cowboys. Even with an impressive college career, including finishing 3rd in SEC history in total yards and 4th in TD’s, Prescott was not included in the list of QB’s to watch out for. However, it is evident the rookie is looking to change that. Although it is too early to tell, Prescott may be just the QB the Cowboys have been waiting for, a confident QB, with impressive arm strength who sees the field well. A rookie who shows leadership qualities, composure, and agility.  It will be interesting to see how he holds up against the rival Giants. Just the first of many tests for the rookie from Louisiana.

Vikings: Just like that, Viking fans had their SuperBowl fantasies crushed when Teddy Bridgewater went down with a non-contact injury, which turned out to be an ACL tear. Desperate for a QB, the Vikings traded for QB Sam Bradford. Needless to say, Viking fans aren’t crying tears of joy. The 1st overall pick by the St. Louis Rams in 2010 never lived up to the hype. Plagued by injuries during his short career, Bradford is looking to make a comeback as a Minnesota Viking.  Another example of a top rated QB in the draft that cannot make the transition to the NFL. Hey, it could be worse. At this point, beggars can’t be choosers. Speedy recovery to Bridgewater and good luck to Bradford, he’s going to need it.

Broncos: Coming off a SuperBowl win in which the defense was utterly dominant, there had been much discussion in the preseason as to who would step in the colossal shoes that Manning left vacant in his retirement. Leigh Steinberg protege Paxton Lynch has all the tools to become a successful NFL QB, but easing him into that role seems to be the best bet. Lynch will benefit from his time on the bench. Mark Sanchez who is making a career as a journeyman lost the QB competition to Trevor Siemian, the Florida native who is the epitome of calm, cool and collected. Sanchez staying true to form packed his bags and headed down South to warm another bench.

Patriots: Much to the disgust of Patriots fans everywhere Tom Terrific will sit out the first four games. Backup QB, Jimmy Garropolo who some have compared to Tony Romo (not sure if that is meant as a compliment) will get the chance to prove himself. This could be another Matt Cassel situation. Garropolo steps into a system he knows well manned by a coach who has the utmost belief in him. Garropolo was the highest QB pick Belichick has ever made in a draft in his 17 years as the head coach of the New England Patriots, that has to count for something. Jimmy G is not Brady, this showing will be an audition, all eyes will be on him. If he does well, some team will surely offer him a gaudy contract when his contract expires after the 2017 season with the hopes that the magic will continue. However, if fans think that the Patriots are at a serious disadvantage without Brady for the first 4 games, think again. The system is still in place, bodies are healthy, and they made some fantastic additions in the off season. The Patriots will handily win the AFC East.