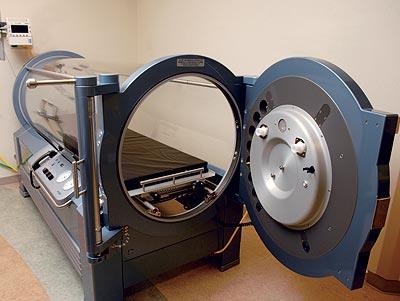 It is no secret how I feel about CTE. It seems like every day a new case emerges and a young life is irrevocably damaged. Age is not a factor, playing time is not a factor, anyone and everyone that plays in the NFL is at risk. People argue that athletes know the risks going in, that they make enough money to play a sport, injuries come with the territory. Of course, injuries are part of the game. What should not be part of the game is dementia, memory loss, confusion, depression, aggression and suicidal thoughts.

After the 2012 suicide of beloved linebacker Junior Seau, Hall-of-Fame QB Joe Namath felt there was more that needed to be done. Namath reached out to Jupiter Medical Center in Jupiter, FL to inquire about treatments for brain injuries. It was there where Namath’s experiment with hyperbaric oxygen therapy began.

Hyperbaric Oxygen Therapy is a chamber where atmospheric pressure is controlled. It delivers 100% oxygen. Your lungs gather more oxygen than it would under normal circumstances. The oxygen is carried through the blood and aids in the healing of tissues and organs. It has been used to treat infection of skin or bone, burns, decompression sickness, carbon monoxide poisoning and anemia, amongst other ailments.  There are numerous clinics that provide the treatment now, as well as options to buy a personal chamber.

The Defense Department has spent $800 million dollars on brain injury research. The NFL has also donated money to concussion-related research….with strings attached of course. According to an article from Beth Page on arstechnica.com, the NFL had quite a few strings attached to the numerous donations they have made to research. The NFL seems to want complete control over the research when they do not have that, they back out and take their “kind” donation with them.

Until the NFL steps up, players with and without extensive brain trauma will explore alternative treatments in reversing some of the damage done to their brain. Joe Namath did a series of hyperbaric oxygen treatments. Dozens of athletes in various sports have also tried HOT, many have purchased their own machines.

Namath later disclosed to Yahoo Sports: “To be able to see, to literally be able to see, with the nuclear scan the cells that had stopped working to start working, to get blood flow. To be restored, renewed and start looking like the rest of my brain. The FDA approved this study and they want another study, this one on 100 people.”

Namath has spoken time and time again how his health has improved since the therapy, as well as improved memory. Time will tell if the benefits will improve or remain long term. However, this therapy may restore hope for many who are suffering and feeling hopeless. It’s about time more exposure is brought to hyperbaric oxygen therapy. Perhaps the NFL should jump on board. NFL locker rooms would benefit from having a chamber in each locker room.