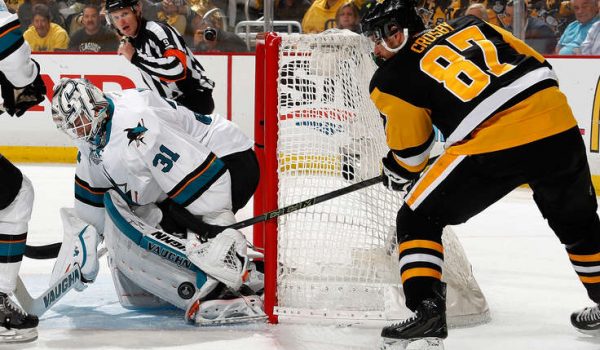 San Jose Sharks kept the Stanley Cup hopes alive after forcing a Game 6 after a 4-2 win over the Pittsburgh Penguins at Consol Energy Center.

The Penguins, who now lead 3-2 in the series, had a chance to win the Stanley Cup on home ice for the first time in franchise history, but the Sharks delayed that celebration.

“We knew it wasn’t going to be easy,” Penguins coach Mike Sullivan told NBCSN. “These are two really good teams playing against one another, and the elimination game is always the most difficult, we knew it going in, we knew we were going to have to bring our best, and I thought we did a lot of really good things out there.”

Both teams were able to get on the scoreboard fairly quickly in the game. With only 1:04 into the first period, Sharks defenseman Brent Burns wrapped around the net for a goal. Sharks center Logan Couture soon followed 1:49 with a goal deflected from Justin Braun. Both goals were the first in the series for Burns and Couture.

“Figured he would be a little nervous tonight, obviously what’s at stake,” Couture said of Murray. “We were able to get a couple by him early.”

Still, the Penguins were not giving up too early. They quickly tied it up with back-to-back goals a little over three minutes later. Evgeni Malkin put the puck passed Sharks goalie Martin Jones during a power play goal. Not 22 seconds later, Carl Hagelin even the score after Nick Bonino intercepted a pass.

According to NHL.com, the four goals were scored in the first five minutes of the game. This broke the record set in Game 4 of the 1992 Stanley Cup Finals between the Penguins and the Blackhawks where both teams scored twice in the first 6:51.

San Jose was able to take the lead back on Melker Karlsson’s game-winning goal at 14:47 in the first period. Karlsson scored on what was the Sharks’ fifth shot on the game. Joe Pavelski would secure the lead at the end of the third with an empty netter with 1:20 remaining.

The Sharks walked away with only 22 shots on goal compared to Pittsburgh’s 46. While the Sharks stepped up offensively in their elimination game, Jones kept the team in the game with his 44 saves.

The save of the night came in the second period. Jones slid from one side of the net to the other and made an incredible toe save after Bonino rebounded a shot from Pittsburgh forward Phil Kessel.