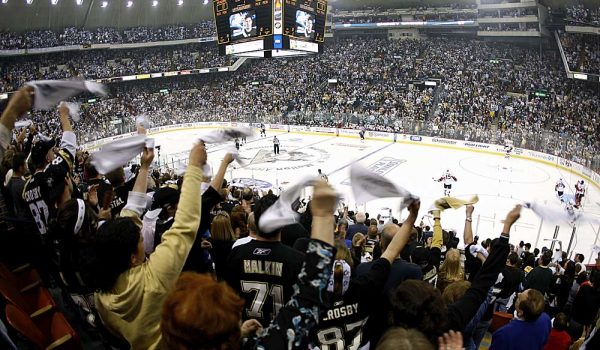 Penguins’ fans are riding high after Sidney Crosby’s overtime goal in Game 2, tying the Eastern Conference Finals 1-1 against the Tampa Bay Lightning. Those in Tampa, Florida, or around the country are packing their bags to prepare themselves for Game 3 and 4 in Tampa.

However, they may need to leave their Pens attire at home. According to the Lightning’s website upon purchasing tickets, fans are banned from wearing any opposing team’s apparel in view of the cameras, such as seats by the glass and high-priced seats.

The dress code policy states, “Any attire, apparel, articles of clothing, accessories (e.g., hats, lapel pins, hair accessories, jewelry), or promotional collateral (e.g., mini-flags, noisemakers) that are branded with the name, logo, or registered mark(s) of the then-current 2015-2016 playoff opponent of the Lightning are expressly prohibited in the Club and in the Club-designated seating areas (together, the “Restricted Apparel”). For purposes of clarification, Restricted Apparel shall include any clothing and/or merchandise (whether official or unofficial) that bears any reference to the Lightning’s then-current playoff opponent (e.g., Detroit Red Wings in Round 1).

In short, the arena wants to give the team a more home advantage feel by only showing off Lightning gear, making it seem the team has more fans. To which every fan in every sport will respond, “Tough luck! Get over it.”

There’s no better feeling than supporting your team on the road. You meet other fans, experience a different city, and have pleasant or aggressive discussions with the home team. And this all starts by wearing your team’s gear.

But what do we expect from Florida teams? They always need to find some new and fancy way to attract fans or just create the illusion they have fans. They crave pink hats. The Miami Heat needed to fill their arena so bad, they tricked LeBron James to join the team. The Tampa Bay Rays dropped the “Devil” from their name in hopes to make them less scary. Then gave away free playoff tickets for free. And the Miami Marlins built a brand new shiny stadium for the locals to play with, however, no one took the bait.

But the Lightning have a different strategy that actually protects their current fans. Bill Wickett, the executive vice president of communications for the Lightning, told The Post-Gazette his reasoning to keep the non-blue apparel out of view. He said, “Those are three season-ticket-only private areas, and those are the spots that our season-ticket holders have asked us not to let the visiting team apparel into”.

Yet we all know the real reason. The Lightning organization is clearly reacting harshly to other fans after last year’s Stanley Cup Championship series. Not because they lost to the Chicago Blackhawks, but because Amalie Arena was flowing in red. What a shocker! An Original Six team has a huge following around the country.

But this isn’t the first time the team has tried to prevent fans from enjoying a game. Last year during the playoffs, fans living out-of-state could not purchase any tickets, that made it easier for Lightning fans to obtain their tickets first. However, the team must forget where they are located. People all over the country move to Florida, mostly for retirement. They may have left their home, but they will never turn their back on their home team.

There is some good news for fans who are not aware of this policy. The arena will either allow you to 1) check your gear at “Guest Services”, 2) be granted a re-entry pass to placed your attire in your car or hotel room, 3) relocate their seats, or 4) forfeit their tickets and request refund.

Judging by the reaction on social media, many fans will go in guns ablazing, with sticks, of course, to protest this policy. They’ll wear their Penguins’ jersey or two other Pittsburgh black-and-gold teams, the Steeler and the Pirates, to prove their loyalty.