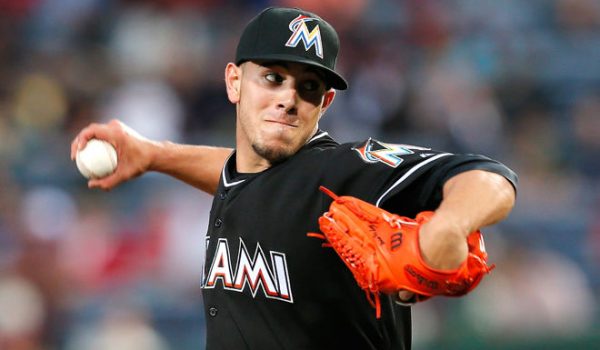 Humble, passionate, charismatic and kind are just a few words that could be used to describe Marlins fireballer Jose Fernandez. On Sunday morning, September 25th, the sports world mourns this talented young pitcher.

Just 24 years old with a bright future that would have surely ended in an induction into Cooperstown, his life was cut short when he was involved in a boating accident with two friends early Sunday. Fernandez, who recently revealed that he was going to be a father via Instagram was loved by many. An outpour of tears and dedication erupted around the league. 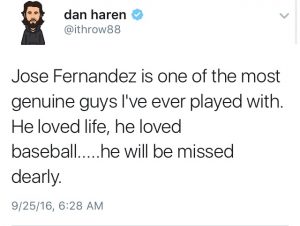 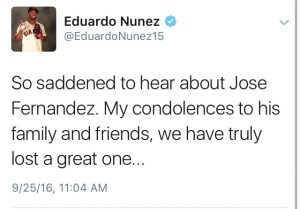 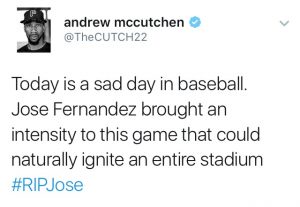 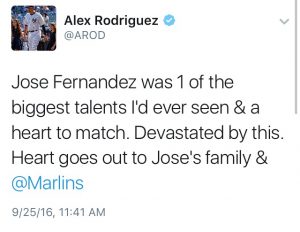 Jose Fernandez had a love and enthusiasm for the game of baseball that could not be measured. Second only to his love for his family. His infectious smile affected those around him, it is a smile that will forever be remembered.

Fernandez, who grew up in Santa Clara, Cuba had attempted to defect to the United States three times, each time resulting in a prison term. In 2007, Fernandez and his mother’s attempt became a success, however, not before a selfless act by Jose. When someone on the boat fell over into freezing waters, without hesitation Fernandez jumped in to save the person’s life. That person, unbeknownst to him , was his mother. His relationship with his mother and grandmother is a bond that can not be broken, even in death. In 2013, Marlins owner Jeff Loria reunited Fernandez with his grandmother in heartwarming fashion. Fernandez has been quoted as calling his grandmother “the love of his life”. His mother and grandmother were fixtures at Marlins games, beaming over the young phenom.

Fernandez is the American Dream. Escaping from oppression to a country that gave him the opportunity to live his dream. He became an American citizen in 2015. In the first MLB game ever to take place at a military base, an emotional Fernandez took video of military helicopters flying over the field at Fort Bragg after the National Anthem. He was a class act, intelligent with a kind heart. He was an impactful presence in the Miami community and an inspiration to many. On September 1st, Jose posted a cryptic tweet that grips at your heart: 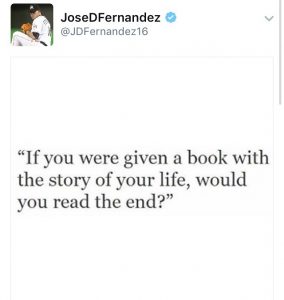 The story of his life ended much too soon. RIP Jose, you will never be forgotten.