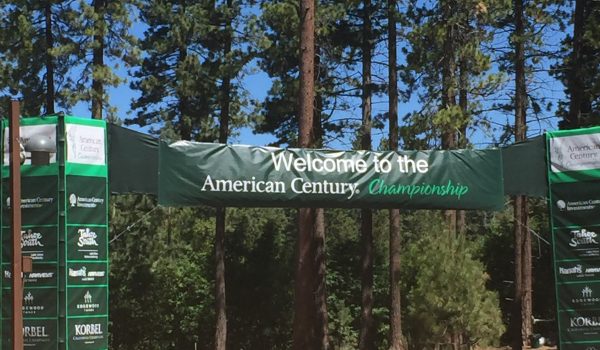 The American Century Championship is one of the premier celebrity golf tournaments in the country. In 2015, American Century Investments and NBC sports signed a seven-year extension. In addition, the tournament will continue to take place in the picturesque, breathtaking Edgewood Golf Course in South Lake Tahoe.

The tournament features over 90 participants, from Justin Timberlake to Aaron Rodgers, to Hall-of-Fame WR Jerry Rice. Mark Mulder, former MLB pitcher became the back to back champion after he rallied to total 74 pts, earning $125,000. 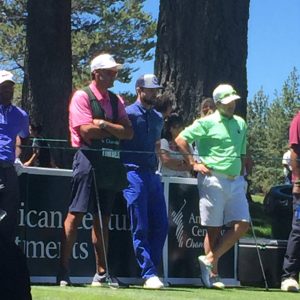 The list of top athletes is incredible. Walking around the golf course on Day Two of the practice rounds a few things stood out to me. The crowd had grown exponentially since last year.  This tournament is the nation’s longest-running golf tournament, the practice rounds give you excellent views and opportunities for photo ops and autographs (especially special for the kiddies). The actual tournament begins on Thursday and runs thru Saturday. This year’s mid-week crowd appeared to have doubled from the year before. The largest crowds gathered around three players. Justin Timberlake, a mainstay at the tournament had a huge crowd watching his every move, per usual he was friendly and interacted with fans. Packers QB Aaron Rodgers also drew a large crowd, spectators threw footballs to him to autograph, he chatted and was very cordial as he made his was around the green. However, one athlete had the largest entourage of spectators during the 5-day event, NBA Superstar Stephen Curry. Two cops following closely behind him, Curry engaged with fans and signed autographs. 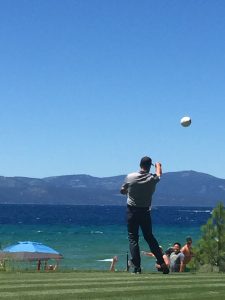 Rodgers throwing back a pigskin with his autograph

If you haven’t had a chance to attend this tournament, add it to your bucket list. If golf is not your thing, and you don’t care to see your favorite athlete/celebrity hamming it up on the golf course, go for the beauty of Lake Tahoe. There is truly nothing like it.